A photograph of the Iranian president holding up his identity card during elections in March 2008 clearly shows his family has Jewish roots.

A close-up of the document reveals he was previously known as Sabourjian ï¿½ a Jewish name meaning cloth weaver.

The short note scrawled on the card suggests his family changed its name to Ahmadinejad when they converted to embrace Islam after his birth.

The Sabourjians traditionally hail from Aradan, Mr Ahmadinejad's birthplace, and the name derives from the Jewish for "weaver of the Sabour", the name for the Jewish Tallit shawl in Persia. The name is even on the list of reserved names for Iranian Jews compiled by Iran's Ministry of the Interior.

Experts last night suggested Mr Ahmadinejad's track record for hate-filled attacks on Jews could be an overcompensation to hide his past.

Ali Nourizadeh, of the Centre for Arab and Iranian Studies, said: "This aspect of Mr Ahmadinejad's background explains a lot about him.

"Every family that converts into a different religion takes a new identity by condemning their old faith.

"By making anti-Israeli statements he is trying to shed any suspicions about his Jewish connections. He feels vulnerable in a radical Shia society."

A London-based expert on Iranian Jewry said that "jian" ending to the name specifically showed the family had been practising Jews.

"He has changed his name for religious reasons, or at least his parents had," said the Iranian-born Jew living in London. "Sabourjian is well known Jewish name in Iran."

A spokesman for the Iranian embassy in London said it would not be drawn on Mr Ahmadinejad's background. "It's not something we'd talk about," said Ron Gidor, a spokesman.

The Iranian leader has not denied his name was changed when his family moved to Tehran in the 1950s. But he has never revealed what it was change from or directly addressed the reason for the switch.

Relatives have previously said a mixture of religious reasons and economic pressures forced his blacksmith father Ahmad to change when Mr Ahmadinejad was aged four.

The Iranian president grew up to be a qualified engineer with a doctorate in traffic management. He served in the Revolutionary Guards militia before going on to make his name in hardline politics in the capital.

During this year's presidential debate on television he was goaded to admit that his name had changed but he ignored the jibe.

However Mehdi Khazali, an internet blogger, who called for an investigation of Mr Ahmadinejad's roots was arrested this summer.

Mr Ahmadinejad has regularly levelled bitter criticism at Israel, questioned its right to exist and denied the Holocaust. British diplomats walked out of a UN meeting last month after the Iranian president denounced Israel's 'genocide, barbarism and racism.'

Benjamin Netanyahu made an impassioned denunciation of the Iranian leader at the same UN summit. "Yesterday, the man who calls the Holocaust a lie spoke from this podium," he said. "A mere six decades after the Holocaust, you give legitimacy to a man who denies the murder of six million Jews while promising to wipe out the State of Israel, the State of the Jews. What a disgrace. What a mockery of the charter of the United Nations."

Mr Ahmadinejad has been consistently outspoken about the Nazi attempt to wipe out the Jewish race. "They have created a myth today that they call the massacre of Jews and they consider it a principle above God, religions and the prophets," he declared at a conference on the holocaust staged in Tehran in 2006.

This article first appeared in the Telegraph on the 3rd October 2009. 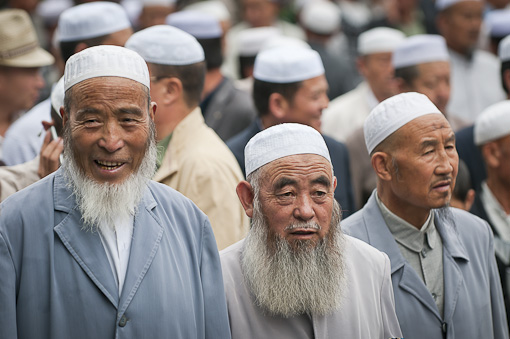 A new report on what it means to be a Muslim in Britain says that a secular British state allows Islam to be practised freely in an atmosphere of respect, security and dignity.

The report exploring the philosophical and theological perspectives of the issue is titled 'Contextualising Islam in Britain: Exploratory Perspectives', and is the outcome of a nine-month project hosted by the University of Cambridge. A total of 26 Muslim scholars, academics and activists representing a diverse spectrum of views from Muslim communities in the UK took part in discussions about what it means to live as a Muslim in modern Britain.

The report covers a wide range of issues including secularism, democracy, Sharia, human rights and citizenship.

The group agreed that Muslims should assert and teach what they see to be the truth of their faith, but also recognise the existence of different religions and the right of others to do the same.

The study urges Muslims to identify shared values between Islam and other world views, pointing out the Holy Qu'ran's emphasis on qualities such as good neighbourliness, charity, hospitality and non-aggression.

The report also redefines a number of terms which the authors believe have been misinterpreted. It notes, for example, that both Muslims and non-Muslims often have "skewed understanding of the term Sharia, which conjures up images of floggings and beheadings."

"The process has already succeeded in bringing together Muslims from a wide range of backgrounds who, in spite of those different backgrounds, have been prepared to work together. What we want to do now is stimulate further dialogue with a wider group of Muslim leaders and communities," said Suleiman.

Minister for Communities Shahid Malik said: "This is a ground-breaking report from a wide cross-section of British Muslim scholars, academics and community leaders. I hope that this report by Cambridge will inspire wider debate from communities across the country on the values that we all share".

He added: "Following the terrorist attacks in New York and London, many Muslim leaders expressed concern that their religion was being misrepresented and misinterpreted. The silent majority of Muslims have since fought hard to restate their religion as they see it and this report is an important contribution to that."

This article first appeared on Zee News on 27th October 2009.

A report from an American think-tank has estimated 1.57 billion Muslims populate the world - with 60% in Asia.

The report, by the Pew Forum on Religion and Public Life, took three years to compile, with census data from 232 countries and territories.

It showed that 20% of Muslims lived in the Middle East and North Africa.

The data also showed that there were more Muslims in Germany than in Lebanon, and more in Russia than in Jordan and Libya together.

Senior researcher Brian Grim told CNN that the overall figure was a surprise and said: "Overall, the number is higher than I expected."

The report, published on Wednesday, also found that Ethiopia has nearly as many Muslims as Afghanistan.

Amaney Jamal, an assistant professor of politics at Princeton University, told the AP news agency: "This whole idea that Muslims are Arabs and Arabs are Muslims is really just obliterated by this report."

Instead the report found that more than 300 million Muslims live in countries where Islam was not the majority religion.

Most Shias live in Iran, Pakistan, India and Iraq.

Europe is home to 38 million Muslims - around 5% of its population with European Muslims making up slightly more than 2% of the world's Muslim population.

More than half of the 4.6 million Muslims in the Americas live in the US - however they make up just 0.8% of the population there.

The Pew Forum has said the findings will lay the foundation for a forthcoming study that will look at how Muslim populations worldwide have grown and what they may look like in the future.

It also plans to compile figures for the other major world religions.

According to internet-based group, Adherents, there are currently 2.1 billion Christians, 900 million Hindus and 14 million Jews worldwide.